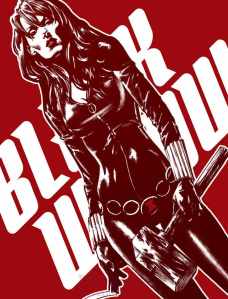 Black Widow by Shaun McGuan. Hey! This character is in some movie that’s kinda popular

You know this morning I had an idea for a column, but now I’m all just “Ahhhh…..”

Ok, so I’m back. I meant to do this blog like two days ago, but I got tired and basically just ran all out of steam. So, anyway…

I renewed my drivers license this week. I didn’t take too long. Maybe just under an hour and as you know, most of it was just waiting to be called. Then it was eye test, cashier, new picture…boom! Looking at the license, I can’t believe how fat the photo makes me look.

I’m actually typing this from Memphis. I just got into town last night. It was roughly a 10 hour trip. I took a discount bus this time and got a good deal on a round trip fare. Downside: although the bus was nicer than I thought it was going to be, it was also less roomy than Greyhound.  Which of course made it harder to sleep on. I brought a Dean Koontz novel to read. One of the side characters is a super-intelligent dog. Hmm…

I bought a couple of comics before I left. I was going to review them here, but maybe I’ll do a You Tube video. I’m not at my house so I’m not sure if it’s work. We’ll see.

I’m late with this tribute, but RIP,  Donna

Cool article about liver and onions! Yum! Stop your hatin’. on this day in…

1566 R.I.P. Leonhard Fuchs. He was a German botanist who compiled the first modern, organized listing of plants and…