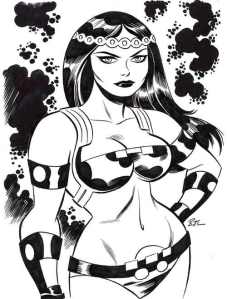 Big Barda wanted to call her memoirs of life on Apokolips Hammer of the Gods, but the name was taken.

I’ve been seeing more police  walking around the streets lately. I’m sure it’s because the weather has finally gotten warm and in this town when the weather gets hot, the violent crime rate goes up. Its going to be a cruel summer. Hey! “Cruel Summer!” Remember that song? http://www.youtube.com/watch?v=FGYNvx9lqDQ

So, I heard this radio documentry on National Public Radio a little while ago called Heartbreakers. It was about an all female Led Zeppelin cover band named Lez Zeppelin. Interesting and moving, it explored the passion these women had for the music and the dedication they had for their craft. Other interesting aspects included the reminisces of the father of one of the band members and the bond he shared with his his daughter over Zep and also the generational quandary for for many people who like Zeppelin and this is the closet they can ever come to seeing them live. I’m not the greatest Led Zeppelin fan in the world, but I really enjoyed this radio story. If you’re a Zep fan, of course it’s right up your alley and if you’re not, you might still find the family bond aspect interesting and the ladies determination inspiring. http://www.fallingtree.co.uk/audio_gallery/heartbreakers_the_story_of_all_girl_zep

The Black Swan: I admit it…sometimes I’m a middle brow jerk. I was skeptical when I started started watching this psychological drama about a ballet dancer getting in touch with her dark side in order to play a coveted part in an upcoming production. At first I  was like, “What’s the big deal with this film?” There was a little too much, “I’m pretty and fragile,oh the pain!” But by the second half, I was sold. Natalie’s breakdown, Mila’s taunts, and Darren’s camera work and visual effects had me totally engaged. The film is gripping and visually stirring.

Secret Avengers #12: Ed Brubaker’s final story with art by Will Conrad and Mike Deodato. We learn how John Steele was brain washed/possessed by the bad guys. This issue functions as a cap to Brubaker’s run and also seems to solidify The Shadow Council as ongoing villains for the series. Seems like they’ll be antagonist for the Secret Avengers much in the same way Corba is for G.I. Joe or Hydra is for Cap America and SHIELD, the underground group that pops up periodically to cause trouble. This issue was not bad, not good, just sorta there.

Batman Inc #5: I’m still having fun  with this title. Batman and El Gaucho meet the modern day Batwoman and Hood. It also ties in with 50’s Batwoman ( I know, I know…I’m still gonna call her 50’s Batwoman). This issue gives a resolution but it also provides set up for future grand conspiracies. So far, I’m in.  This series isn’t dark and stormy night Batman, it’s gadgets, hideouts, and super-villain secrets Batman…there ain’t nuthin’ wrong with that.

The New York Five #4: This is the end if the mini-series. I’m not sure if I should do a full review of the entire story or not. We do get sorta resolutions to the various girls’s immediate situations, but we’re left with many possibilities for future storylines. It just SO  feels like the pilot for a TV show.

That’s all I got for now. Take it easy